Ranger Station Charlie is a location in the central Mojave Wasteland in 2281. It is located along a railroad track and pre-War powerline towers, southwest of Novac and east of Harper's shack.

The pre-War Shady Pines trailer park has been converted by the New California Republic Rangers into a stronghold. As a ranger station, it provides the rangers with a safehouse and establishes a semblance of territorial control for the southeastern sector of the Mojave,[1][2] especially important after the fall of Camp Searchlight. The trailers have been piled up to create a makeshift fortress, with the communications center and barracks set up in the old trailer park office building.[Non-canon 1]

The commanding officer of the station is Ranger Beaumont,[3] but both he and the majority of his command are out on patrol, leaving his communications officer, Stepinac to watch over the encampment while they were away. While the location of the encampment allows for force projection throughout the region, its placement below the hills makes its radio communications with Camp McCarran spotty.[4][5]

The main building is to the right of the entrance. The second time the player character arrives at the station, or if requested to check on the site by Ranger Andy, the station's troops will have been slaughtered. There are two bodies on the floor in the first room, each booby-trapped with a frag mine hidden underneath. One of two audio tapes (tape #2) is straight ahead from the entrance, on top of the three stacked metal boxes.

The other tape (tape #1) is under the desk next to the metal boxes. The tape has been left behind intentionally by members of Caesar's Legion, claiming responsibility for the massacre at Ranger Station Charlie, and informing the listener that they took a hostage with them.

The room on the left with bunkbeds contains a trap consisting of a tripwire running across the doorway, that is connected to a rigged shotgun under the bunk beds. This gun is pointed at two antique fire extinguishers, positioned in front of an armed bottlecap mine that will detonate either with proximity or by the explosion from the fire extinguishers being hit by the rigged shotgun blast.

The room also contains various junk and two dead NCR soldiers. The male corpse will have NCR Ranger patrol armor in poor condition, along with a random weapon such as a pistol or revolver. Under the bunk bed with two cinderblocks underneath is an Average locked floor safe, containing ammunition, caps, Rad-X, and stimpaks. Under the bed in the northeast corner is a locked footlocker, but it is empty.

Outside the building, many derelict mobile homes and cars are piled up, acting as fortifications. Ammunition, weapons, footlockers, and beds can be found inside the trailers.

The station is seen from the outside 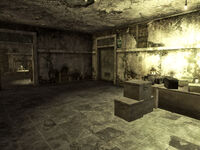 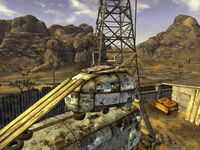 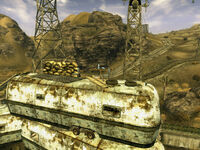 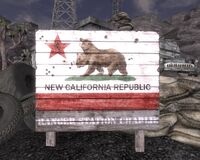 The front of the entrance board

The back of the entrance board

Back of board texture file 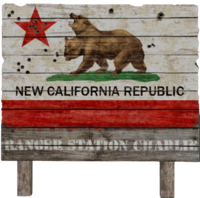 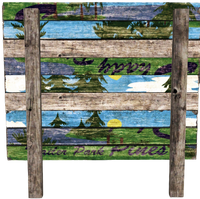