Ranger Station Alpha is a location in the Mojave Wasteland in 2281, located north of Boulder City.

The station is perched above Lake Mead with a commanding view of the Fort. It is comprised of three tents, a campfire, and a radio tower. There are a few beds in the middle tent. Three rangers are stationed here, including Ranger Rebecca Lineholm.[1]

The ranger stations in the Mojave are named in order of the real world NATO phonetic alphabet. Ranger Station Alpha is unique by diverging in spelling, from the NATO alphabet's "Alfa" to the more normative "Alpha." 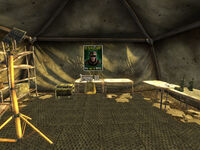