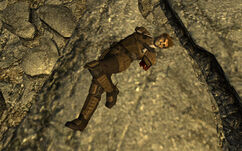 “You never lost anybody, have you? Not like this. Never had to think about that person you love all alone out there, cooking in the sun like meat... NCR never leaves a soldier behind. That's what the recruiters told us. Promised us. We believed them.”— Private Morales

Ranger Morales' corpse is a location in the Mojave Wasteland, just to the east of REPCONN headquarters.

A map marker is added when the Courier speaks to Pvt. Christina Morales who's located in the Camp McCarran concourse. She is a sad woman in NCR armor sitting on the left of the concourse upon entering from the Camp McCarran terminal building. When speaking to her, it's possible to find out that her husband, Esteban Morales, an NCR Ranger, had been killed in the line of duty and that his body was not recovered. Agreeing to find the body of her husband starts the unmarked quest A Final Plan for Esteban.

The Fiends created a "honeypot" with the corpse, surrounding it with snipers and traps in order to kill more NCR who attempt to retrieve the body. Ranger Morales' corpse is slightly northeast of REPCONN Headquarters. The area consists of three buildings in a U-shape around an open area with the corpse in the middle next to a flagpole. There is also a park bench and a dumpster off to the left.

There are three ways into the area, including from the REPCONN Headquarters side, the train tracks side where a trip mine and a rigged shotgun can be found, or from the far side where there are numerous bear traps. The Fiend snipers have a visual from all sides, making it difficult to approach undetected.

There are two bodies located here, the other being Ranger Thomas Jackson. When speaking with Private Morales in the concourse, it is revealed that this is the body of Esteban's best friend. When command refused her request to send out a retrieval team, Jackson took it upon himself to attempt it without the command's approval.[1] It is not necessary to retrieve Jackson's body for the quest.