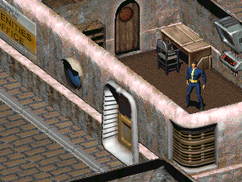 “Hello there, stranger. Always a pleasure to see a new face. Name's Randal...I'm the Chief Amenities Officer. Need something?”

A man in his mid-thirties with thinning black hair[1], Randal heads Vault City's Amenities office. He is a fairly polite person, though he shares his fellow citizens' disdain for everything mutated. He distributes basic living necessities and tools among citizens (and guns among guards) as well as releases rewards and other items cleared by higher ranking citizens.

Randal appears only in Fallout 2.

Retrieved from "https://fallout.fandom.com/wiki/Randal?oldid=3322390"
Community content is available under CC-BY-SA unless otherwise noted.