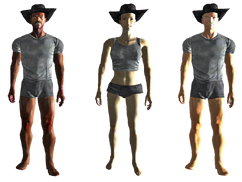 Rancher is a cut non-player character still present in the game's files of Fallout: New Vegas.

The GECK has listed two male and one female character. One male and the female are classed as soldiers, the other male is classed as an adventurer.

Ranchers were added during the development stages of Fallout: New Vegas, but were cut from the final retail release of the game.

Retrieved from "https://fallout.fandom.com/wiki/Rancher?oldid=3214302"
Community content is available under CC-BY-SA unless otherwise noted.