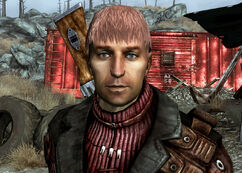 “About damn time you showed up. We've been waiting here for-fucking-ever.”

Ramsey is a slaver from Paradise Falls located at the train tunnel in the year 2277.

Searching the Northern Wastes for wayward and lost scavengers and settlers, Ramsey and his small band of (mainly albino) slavers have recently had to deal with losing one of their prized specimens after he deactivated his collar and fled. A slave was killed in the process, and Ramsey is currently strengthening his camp, locking up his possessions, and paying local Pitt raiders to locate his escapee.[1]

Ramsey appears only in the Fallout 3 add-on The Pitt.

Retrieved from "https://fallout.fandom.com/wiki/Ramsey?oldid=3437953"
Community content is available under CC-BY-SA unless otherwise noted.