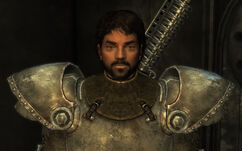 Still in the Dark
Render Unto Caesar

“Where did you learn that password? And tell the truth, because I'll know if you're lying.”

Paladin Ramos is the head of security for the Hidden Valley bunker in 2281.

Ramos is the head of security in the Mojave Chapter of the Brotherhood of Steel and guards the entrance to the Hidden Valley bunker where the Brotherhood has secluded itself since its defeat at HELIOS One. His room is just at the bottom of the bunker's entry stairway and he will confront the Courier as soon as they enter the bunker, taking them into custody unless they are accompanied by Scribe Veronica.

Retrieved from "https://fallout.fandom.com/wiki/Ramos?oldid=3168294"
Community content is available under CC-BY-SA unless otherwise noted.