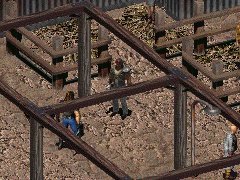 Ramirez is a thug in charge of security at the Mordino family drug testing compound, the Stables, in 2241.

Ramirez is a heavily sunburned man[1] with a relatively simple job: keep the Stables secure, thereby keeping the Jet flowing. To that end, Ramirez's entire purpose is to hold a gun, look tough, and keep everything on its proper side of the fence. While this means keeping inquisitive folk out, it also means that he is tasked with keeping the Stables' test subjects inside the compound. Shortly before the arrival of the Chosen One, a slave breakout occurred, and the Stables lost several test subjects into the wasteland.

Most employees of the Stables are clean, and do not use recreational drugs, especially Jet. Ramirez, however, is an exception. Persons with even moderate perceptive abilities note that Ramirez is constantly exhibiting the side-effects of Jet usage - reddened eyes, running nose, and a persistent cough.

Whether Ramirez took up Jet on his own accord or was coerced into it is unclear, but the Mordino family has bent the man's habit to its own will. Although he is blissfully unaware of the fact, like the slaves he guards, Ramirez is also being used to test Jet. As Big Jesus Mordino put it, "Not everyone at the Stables knows they are a test subject."

Ramirez appears only in Fallout 2.

Retrieved from "https://fallout.fandom.com/wiki/Ramirez?oldid=3347230"
Community content is available under CC-BY-SA unless otherwise noted.