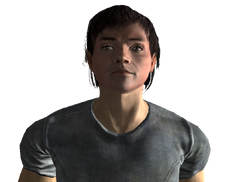 “Candace, it's Ralph. Tell dad there's no way in hell I'm spending nuclear Armageddon trapped with him in a fucking closet. You can have my number. It's "6." Now if you'll excuse me, I've got a mushroom cloud to walk into. Have a happy holocaust!”— Ralph, on his holotape

Ralph Keller was a man who was part of the Keller family.

As Ralph mentions in a note to his sister, he had no intention of taking shelter from the imminent disaster and being restricted to a confined location with his father, deciding instead that he has "a mushroom cloud to walk into." This indicates that he committed suicide via a nuclear explosion.[1]

Ralph Keller is mentioned only in Fallout 3.

Retrieved from "https://fallout.fandom.com/wiki/Ralph_Keller?oldid=3146419"
Community content is available under CC-BY-SA unless otherwise noted.