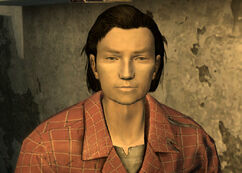 Ralph is a trader living in the Freeside in 2281.

“He might not look it, but Ralph from Mick & Ralph's is no slouch with a keyboard. I've heard he's helped reprogram several robots in his time.”— Rotface

He, together with Mick, is the co-owner of Mick & Ralph's. Apparently he is good with computers and has reprogrammed several Securitrons. He sells consumables while his partner sells weapons.