Rainman is one of the inhabitants of Cold Water in 2197.

Rainman enjoys playing in the local casino. He is a "special" person who seems to know how to win and perhaps cheats by counting cards. He has no particular role in the Warrior's adventure.

Rainman appears only in Fallout Tactics.

Rainman is a reference to a 1988 comedy-drama Rain Man. 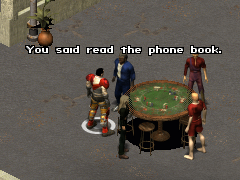