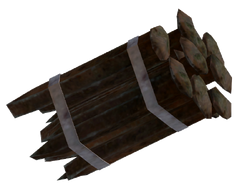 Railway spikes are a type of ammunition in Fallout 3.

This section is transcluded from Railway spike. To change it, please edit the transcluded page.

Repurposed fastening tools from the pre-War railway system, these spikes are capable of crippling and delimbing those unlucky enough to be the target of their fire. Their speed and kinetic energy are well into the lethal range, and their velocity has been fine-tuned to maximize effectiveness.[1]

Though only moderately damaging, railway spikes are very effective at dealing limb damage (due to a 3x limb damage multiplier) and are able to cripple limbs often with just one shot. On the killing shot, a spike may tear off the struck limb, and possibly pin it to a fixed object, such as a wall or floor.