The railway rifle is a improvised weapon that pneumatically fires railway spikes at high velocities, typically with enough force to sever and pin limbs to nearby walls or objects.

Railway rifles are a uncommon sight in the wasteland, only being present in Appalachia, the Capital Wasteland and the Commonwealth. Laszlo Radford and Tinker Tom are some of the only known users of railway rifles.

In Fallout 3, with the proper schematics, the railway rifle is a craftable weapon. It is made from a crutch, a pressure cooker, a steam gauge assembly and a fission battery. The crutch forms the stock and grip part of the gun, the pressure cooker acts as a firing chamber, the steam gauge assembly forms the forearm, ammunition storage and barrel of the gun, and the fission battery works as a power source to operate the weapon.

In Fallout 4 and Fallout 76, the railway rifle has a wider range of modifications available, and can have various sights attached or be made fully automatic.

A product of Tinker Tom's attempts to find a way to improve the railway rifle, the prototype railway rifle has a lower damage, fire rate, and ammo capacity than the standard railway rifle. It is seen being test fired at Railroad HQ by Agent Terry, where it explodes and injures him. According to Tinker Tom's terminal, Terry was also injured testing previous prototypes.[1] 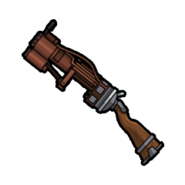