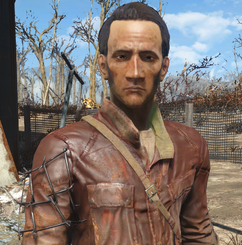 Railroad agents are members of the Railroad in the Commonwealth in 2287.

Agents of the Railroad can be found in various locations across the Commonwealth. Their main objectives are gathering information about the Institute, helping runaway synths and fighting the Institute Gen 1 synths. Agents who specialize in combat or other dangerous activities are known as "heavies" and are significantly better armed and armored.

If the player character is hostile towards the Railroad, one may encounter some agents when at pre-War military outposts.

Railroad agents appear only in Fallout 4.

Retrieved from "https://fallout.fandom.com/wiki/Railroad_agent?oldid=3310453"
Community content is available under CC-BY-SA unless otherwise noted.