The Railroad HQ is a location in the Commonwealth in 2287.

Railroad HQ is the second and current base of operations of the Railroad after their main base of operations, the Switchboard, was raided by the Institute's forces. It is located inside the crypt of the Old North Church.

The entrance to the HQ is hidden and can only be opened by following the Freedom Trail and solving the puzzle to unlock the rotating wheel at the hidden door. The crypt may be dark, but it offers protection from attacks and prying eyes and allows the Railroad to keep functioning.

After the Sole Survivor joins the Railroad, they are given free rein in the HQ. There is a large circular table in the middle of the chamber where Desdemona usually lingers. To the left of the entrance is Doctor Carrington's area, with medical supplies and a treatment bed. To the right is Tinker Tom's corner, containing research equipment, a terminal, and a firing range.

On the other side of the circular table is a rest area where Drummer Boy and Glory can be found (Deacon will also be here if the Sole Survivor chose not to take him as a follower or elected not to send him to a settlement upon dismissal). To the left is P.A.M.'s chamber, with several large computers and her terminal on the table in the lower section.

There is a chalkboard on the wall showing all of the railsigns. There is another exit from the HQ to the left of the rest area. This exit connects to an escape tunnel, which leads directly to a ruined building with a chained door on the surface north of the church.

There is a Railroad agent decoding Morse code signals at a ham radio. The decoded messages are as follows.

Railroad HQ only appears only in Fallout 4. 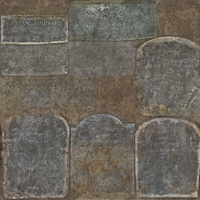 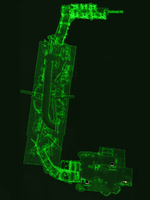 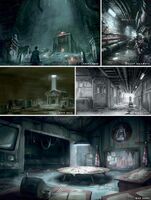 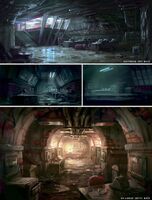