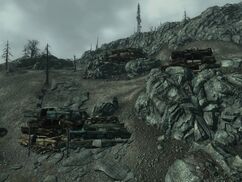 The fortifications are three stacks of cars turned into raider territory, two stacks have been converted into "vantage points" whereas the last (and highest) stack is a wooden plank leading onto a platform. On the platform, there is a table with some loot.

There can be up to six raiders depending on the Lone Wanderer's level, including one armed with a missile launcher.

These raider wreckage fortifications only appear in Fallout 3.

Grognak the Barbarian is in the chest on the left

Under the bent tin cans

Raider with the missile launcher

Add a photo to this gallery
Retrieved from "https://fallout.fandom.com/wiki/Raider_wreckage_fortifications?oldid=3389047"
Community content is available under CC-BY-SA unless otherwise noted.