Start a Wiki
The Pitt armor 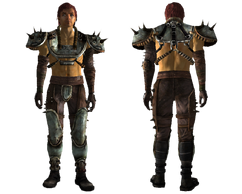 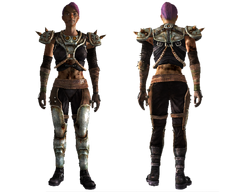 Raider throwdown armor is a piece of armor in the Fallout 3 add-on The Pitt.

Raider throwdown armor is a variant of the raider armor. It seems to resemble a trimmed-down metal armor. It provides a Damage Resistance of 18, as well as a bonus of 3 to both Unarmed and Melee Weapons.

It can be repaired using all variants of raider armor found in The Pitt, as well as raider armors from the Capital Wasteland.

Aesthetically, the armor is comprised of components from both metal armor and raider sadist armor.

Retrieved from "https://fallout.fandom.com/wiki/Raider_throwdown_armor?oldid=3324421"
Community content is available under CC-BY-SA unless otherwise noted.