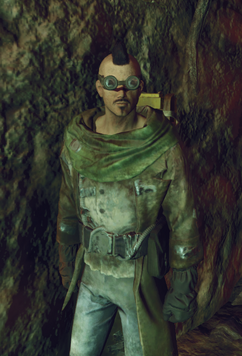 The raider punk is a raider at the Crater Core and potential ally in 2103. He may also be recruited in random encounters.

The raider punk is an amateur radio operator, cryptid enthusiast, and cryptologist. He claims to be part of an amateur radio network, or "ham net," dedicated to cryptid hunting and has contacts all over Appalachia.[1][2] He prefers not to use his real name, instead using his network call sign, "Punk."[3]

Similar to other raiders, raider punk was raised in random gangs, primarily to the north of Appalachia.[4] In the last gang prior to the Raider group found in Crater, the raider punk met Jimbo, a fellow cryptid enthusiast.[5] After traveling to Appalachia with the Raiders in 2103, raider punk claims to have had a close encounter with a mothman in the wilderness, peaking his interest in the cryptids.[6]

Raider punk joined the cryptid radio network after being invited by Jimbo, who left Crater sometime before raider punk.[7] The raider punk's primary function with the network is as a cryptologist, encrypting and deciphering encoded messages and transmissions.[8][9] Despite having tried hunting cryptids in the field like other members, raider punk prefers to stay back and decipher messages.[10]

Although he claims to be a raider, the raider punk admits to not fitting in with Crater's rough residents and frequently shows empathy toward those in need, especially fellow cryptid hunters.[11][12][13] He knows and communicates with Grahm, going so far as to want to teach him how to use a ham radio to act as the co-host of a radio show.[14][15]

Upon encountering the raider punk in the underground area of the Core, one can tell him that they believe he can receive secret messages on his radio. This will result in him giving the player character the Ally plans for the raider punk radio. Building this at a C.A.M.P will result in the raider punk residing at the camp as an ally, offering generic radiant quests while he stays there until replaced by another ally such as Beckett or Sofia Daguerre. He can also be found randomly in Appalacia such as near stations.

The raider punk appears only in Fallout 76, introduced in the Wastelanders update.

Retrieved from "https://fallout.fandom.com/wiki/Raider_punk?oldid=3494918"
Community content is available under CC-BY-SA unless otherwise noted.