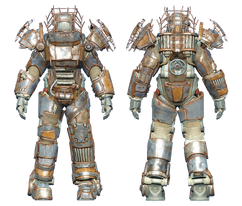 See armor parts
“Across the Commonwealth, some of the fiercest Raider leaders have scavenged old suits of Power Armor and restored them to full working order.”— Fallout 4 loading screens

The armor appears as scrap metal over the limbs of the power armor frame, such as those in the legs that do not appear to be from any specific suit. The torso appears to be from a T-45 chest piece evident by the distinguishable shape, it has heavy reinforcement with simple scrap metal. The arms and shoulders may be from a heavily damaged T-51 as the shoulders resemble the shoulder pieces of a T-51. The helmet is not from any suit and appears to be homemade. The helmet does show some professional attachments such as what appears to be a transceiver on the back, reinforcement on the face plate protecting the wearer's eyes, a respirator on the front of the helmet and a security flashlight on the side of the helmet.

The armor provides moderate defense while being very easy to repair, requiring only steel .

Map of power armor frame locations, a full set of raider armor may be found at the red dot in the southernmost area