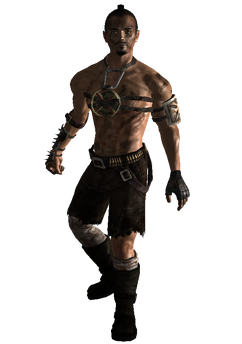 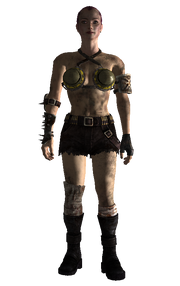 Worn by a female raider

The raider ordinance armor is a piece of armor in the Fallout 3 add-on The Pitt.

Raider ordinance armor is a variant of the raider armor. The breast cups on the female model appear to be hollowed out mini nukes with the red tips removed or painted over, while the male variant has the back end of the mini nuke's stabilizer fins tied over their chest.

The female version of this armor mimics the artwork seen on many planes during the Second World War which showcased women riding on bombs or wearing them as clothing. This is a trend which has continued to this day through comic books, and films such as Tank Girl.

The pants portion of this armor may appear to be bright red when worn by the player character. [verified]

Retrieved from "https://fallout.fandom.com/wiki/Raider_ordinance_armor?oldid=3324417"
Community content is available under CC-BY-SA unless otherwise noted.