“No more excuses! Kill anyone who tries to get through!”

Raider lieutenants are elite raiders in Fallout: Brotherhood of Steel. They first appear in Carbon Mill.

Being the highest-ranking members of the matriarchal Texas raiders, the lieutenants are all females. They only carry firearms, like pistols and rifles, and are crack shots.

They are mainly encountered in the raiders' lair in Carbon Mill, where their leader, the raider matron Jane, resides. They also make a brief appearance in Los' Gladiator Pit in the fourth and fifth round.

Raider lieutenants appear only in Fallout: Brotherhood of Steel. 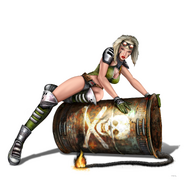