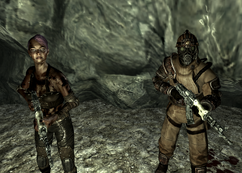 Raider fighters are characters found in The Pitt's game files.

Raider fighters were set to appear in the Fallout 3 add-on The Pitt but were cut from the DLC's final version.