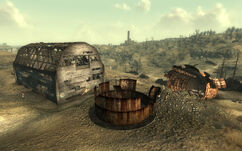 Overview of the farmhouse site

The raider farmhouse is an unmarked location in the Capital Wasteland in 2277. It is home to several raiders, located due north of Greener Pastures disposal site, and to the west of Old Olney.

The farmhouse is a short walk west of Vault 92. There is a two-story barn in the middle of the farm. Opposite its entrance is a broken silo with human body parts in it. Off to the side is the skeleton of the silo.

Despite the small size of this farmhouse, it is home to quite a few raiders. Patrolling outside the farmhouse are three or four raiders (one could have wandered inside), most of which are armed with melee weapons and possibly grenades.

Inside the farmhouse itself, on the upper level near a large window facing north is another raider, who is often armed with a ranged weapon (such as a 10mm pistol, a .hunting rifle, or in rare cases, a sniper rifle). In addition, there is another raider who spends most of their time sleeping on a bed inside the fallen shell of the grain silo, but if not, they will also be patrolling the grounds. In addition, one may encounter one or two giant radscorpions either along the fringes of the camp or attacking the raiders.

The raider farmhouse appears only in Fallout 3.

Sleep area
Add a photo to this gallery
Retrieved from "https://fallout.fandom.com/wiki/Raider_farmhouse?oldid=3389052"
Community content is available under CC-BY-SA unless otherwise noted.