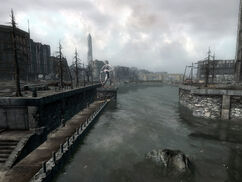 The raider canal is a raider camp located in the Capital Wasteland in 2277.

The raider canal is located southeast of Farragut West Metro station and down the staircase on a dock. Three raiders are encamped on the eastern bank. They keep a stash of meds and ammunition on the lower causeway. When arriving at the raider canal, the raiders may be in the midst of a pitched battle with two level-dependent super mutants on the other side of the riverbank.

At least one of the mutants will be armed with a heavy weapon, such as a missile launcher or a minigun. If the Broken Steel add-on is installed, a super mutant overlord may appear.

The raider canal appears only in Fallout 3.

Retrieved from "https://fallout.fandom.com/wiki/Raider_canal?oldid=3450427"
Community content is available under CC-BY-SA unless otherwise noted.