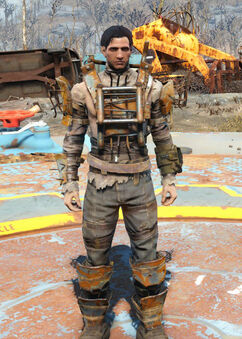 Raider armor is a set of armor in Fallout 4.

The raider set of armor is often found on the many brigands and cut-throats across the wastes. The armor varies in quality and appearance with most consisting of scrap metal plates molded into armor pieces reinforced by metal bars along with wires fastened together by leather straps.

The barbaric appearance of this armor is bolstered by the gruesome trophies some ruffians choose to attach to the armor pieces such as skulls or other vulgar mementos. Not only is the armor "homemade" but it is of low quality.

As with other modded armor pieces, raider armor changes appearance with different mods. However, there seem to be only two appearances. First include the standard, welded and tempered variants, consisting of rusty scrap metal plates, wires and leather straps, with wires sticking considerably outward from the body. Second group, including hardened and buttressed variants take appearance of large, bulky plates of riveted steel with patches of rust, heavy-duty chain links, metal rods and thick padding. Some of the plates stick out considerably as well, possibly making the Sole Survivor or enemies easier to hit.

There are six different visual variants of the standard raider chest piece, however all share the same display model in inventory, or when dropped, and the statistics remain the same for each variant. Although the six variants appear to be progressively more complete stages of the same armor, the world object version is the second-to-last version, missing the rebar inside the headpiece.