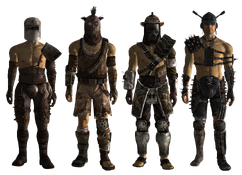 This armor consists of what appears to be metal chaps adorned with severed hands, and a leather plate of sorts worn on the left shoulder.

A bandolier is draped across the front of the apparently leather overshirt (vaguely resembling a tank top), and on the left knee, there appears to be some sort of colander being used as a knee pad. The outfit also includes shorts made from either leather or some variety of canvas-like material. A screwdriver is secured near one boot, presumably to be used as a makeshift boot knife, despite the fact, its only function is for aesthetic value. It's also feasible that it is the screwdriver used by the player when picking a lock.

This armor consists of various leather belts supporting a tire worn on the left shoulder, and a leather gauntlet with a raider arclight helmet attached to it. This may have been used as a small shield for the raiders. What appears to be a heavy duty quilt, wrapped around a pair of leather pants, and completed with sandals, protects the lower half of the body as well as the shoulder and head area.

The women have breast coverings made of metal strainers, that, if looked at very hard, you can see a sort of white nipple covering resembling the cups of a bra. The men have what appears to be an AC vent strapped onto their chest with leather belts. Both the male and female versions have black, torn skinny jeans with metal plates with spikes welded on to them held on by more leather straps covering the crotch and hip regions.

The raider arclight helmet is the supposed matching helmet for the raider sadist armor, but it also goes well with raider blastmaster armor. It mostly looks like a welding helmet used by construction workers.

The raider wastehound helmet appears to be constructed of several pieces of heavy burlap crudely stitched together. It also includes eye protection and tufts of hair. There are some visual differences between gender versions of the item, as the female version's hair patches go in a straight line down the middle of the skull, similar to a Mohawk, whereas the male version consists of three tufts; two on the sides and one on top.

The sadist armor and painspike armor both show the Vault Boy icon smiling. The others portray him with an angry/frowning face. 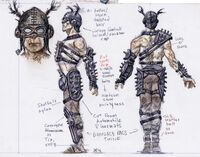 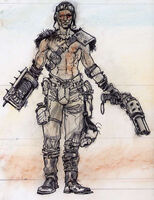 Raider sadist armor concept art
Add an image to this gallery
Retrieved from "https://fallout.fandom.com/wiki/Raider_armor_(Fallout:_New_Vegas)?oldid=3281450"
Community content is available under CC-BY-SA unless otherwise noted.