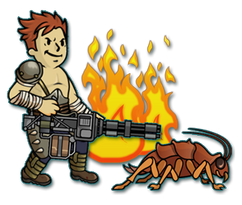 Raiders will randomly attack the vault while wearing raider armor and armed with various weapons. Once they have opened the door by shooting at it they will move through the rooms and briefly combat any vault dwellers they encounter. During their time in the vault, they will drain some resources, which will flash red to indicate they are being stolen.

They can also be encountered during quests. Their leader can be identified as a man/woman wearing painted metal armor and facial markings. They are also equipped with grenades that inflict damage to the dwellers in the battle.

Add a photo to this gallery
Retrieved from "https://fallout.fandom.com/wiki/Raider_(Fallout_Shelter)?oldid=3275723"
Community content is available under CC-BY-SA unless otherwise noted.