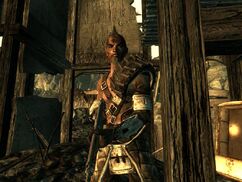 A generic raider found in the Capital Wasteland 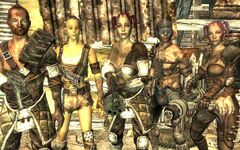 A raider is a hostile character in the Capital Wasteland in 2277.

The raiders of the Capital Wasteland are mostly hostile, lawless, chem-addled ruffians who roam the wastes of the Washington, D.C. area. They are encountered in smaller groups and are armed with a fairly wide range of weaponry.

Raiders have no alliances with other factions and will attack everyone but other raiders or slavers. They appear to be quite cruel, as places they inhabit are usually filled with the mutilated bodies of other raiders and wastelanders.

You may come across a random occurrence of a raider hazing ritual. Four raiders surround a fifth raider initiate standing in only his underwear, each taking a turn in beating him with a melee weapon. The dialogue suggests that he has to take and accept the pain he is receiving. Sometimes the raider can be seen smoking, seemingly ignoring the beating.

On rare occasions, a wastelander may come running up to you, saying that raiders strapped a bomb to them. You are given the option to disarm the bomb. However, Explosives skill does not factor into the chances of disarming it successfully. If you fail, the wastelander will run off, and die shortly thereafter in an explosion. However, if the wastelander is killed before they talk to the player, the bomb will explode either when the player approaches it or after some time.

After The Waters of Life, Enclave camps will appear throughout the wasteland. A few of these camps will be trashed with raider graffiti everywhere, and the Enclave troops will be dead and stripped. 3-4 raiders in Enclave armor are usually nearby. One of these camps can be found southeast of Bethesda Ruins and northeast of Chryslus Building and south of the raid shack. Strangely, raiders do not have power armor training, yet still wear power armor.

Slightly west-southwest of Grayditch, a small group of raiders can be seen holding mole rat races on an abandoned highway. The scene is complete with a pistol shot to start the race. The mole rats then meander back to their cages to begin the process again.

At the Evergreen Mills bazaar, there is a passage in the Northwest corner of this central area, flanked by a pair of mannequins decorated with red lights, this leads up to a raider brothel where you will be greeted by Madame (who is unnamed in the game). A few raider women, the brothel's prostitutes, can be found locked in cells. Upon release, the women will attack the player. 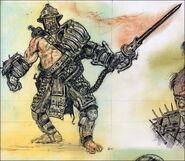 Raider with a Shishkebab. Concept art by Adam Adamowicz. 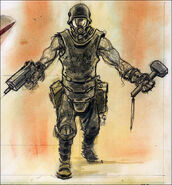 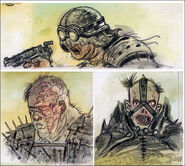 Add an image to this gallery
Retrieved from "https://fallout.fandom.com/wiki/Raider_(Fallout_3)?oldid=2703312"
Community content is available under CC-BY-SA unless otherwise noted.