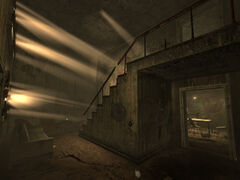 The raid shack is an unmarked location in the Capital Wasteland occupied by raiders in 2277. It can be found due east of the Bethesda ruins, north of the Chryslus Building, and south of the Wheaton armory.

There are two raiders outside, patrolling the front of the house. There is also a small white trailer with two ammunition boxes and Buffout just to the right when entering the grounds. On the opposite side of the yard, there is a table with various items and one ammunition box. Another ammunition box is further under the table and hard to spot.

After entering the shack, there will be three or four raiders depending on one's level. The raiders are on both floors, one upstairs with a flamer and another in the kitchen wielding the unique combat knife, Stabhappy.

There are various supplies within the house and the layout is simple. Downstairs is the kitchen and living room. Upstairs is a master bedroom, kid's bedroom, and a bathroom. All beds in the shack can be slept in. There are many weapons and health items as well as ammunition scattered throughout the house.

The raid shack appears only in Fallout 3.

To the slight northwest, there is a utility pole with "TES-04" engraved on it. This is a reference to The Elder Scrolls 4: Oblivion, which was also made by Bethesda game studios.