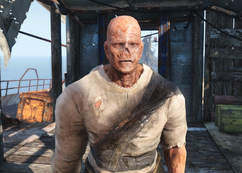 Wreck of the FMS Northern Star

Rags is the leader of the Norwegian ghoul raiders found aboard the wreck of the FMS Northern Star in 2287.

Rags and his crew are still living on their ship, stranded off the coast of Boston since the day the bombs fell. He and his crew have since become ghouls and now defend their stranded ship from mirelurks and other Commonwealth threats. He nor his crew speak English. They will immediately become hostile to the Sole Survivor and shout Norwegian phrases to them and each other.

Rags appears only in Fallout 4.

Retrieved from "https://fallout.fandom.com/wiki/Rags?oldid=3176908"
Community content is available under CC-BY-SA unless otherwise noted.