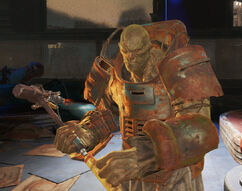 Rage is a powerful super mutant that has successfully navigated the Gauntlet, and as a result, is a challenger in the Cola-cars arena during Amoral Combat.

Amoral Combat: Another combatant has made it through The Gauntlet. As the overboss, the Sole Survivor must kill them.

Rage appears only in the Fallout 4 add-on Nuka-World.

Retrieved from "https://fallout.fandom.com/wiki/Rage_(Nuka-World)?oldid=3450346"
Community content is available under CC-BY-SA unless otherwise noted.