Rage is a recruit in Fallout Tactics.

In a civilized society, Rage's psychosis would be a problem. But in the Brotherhood, it is a major advantage. Clever and very motivated with respect to killing, Rage enjoys the burst mode on SMGs or both barrels with shotguns.

Rage becomes available after the Warrior reaches the rank of Senior Initiate.

Rage appears only in Fallout Tactics.

Rage's appearance is based on Fallout 2 tester and Fallout Tactics designer Daniel Levin.[1] 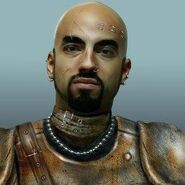