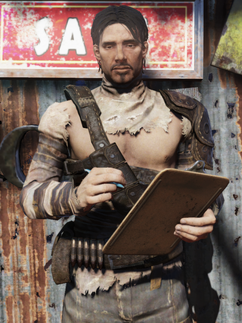 Raf joined the Raiders at some point before they returned to Appalachia. He runs the armor store in the Crater, and crafts some of his own equipment, taking great pride what he sells.

Raf only trusts those who he sees as "one of us" - despite Lou's sometimes depressing nature, Raf accepts him. However, he distrusts Johnny Weston, whom he sees as an outsider.

Raf speaks with a Spanish accent and uses Spanish words such as when he talks. He also uses the word "chavos" as money, which is a pre-War term used across the Spanish-speaking world, particularly Puerto Rico, Cuba, and the Dominican Republic.

Raf appears only in the Fallout 76 Wastelanders update.

Retrieved from "https://fallout.fandom.com/wiki/Raf?oldid=3468271"
Community content is available under CC-BY-SA unless otherwise noted.