Radtoads are creatures found in Appalachia.

Typically found in The Forest and Toxic Valley, radiation from the Great War mutated toads into larger, more aggressive radtoads.

Radtoads are large mutated forms of smaller pre-War toads. They maintain four strong primary legs, but have also grown a thin set of arm-like limbs protruding from the sides of the jaw. Radtoads possess ferocious pointed teeth and a long, tri-barbed tongue. Numerous yellow-red eyes are scattered about the head, and clusters of eggs are strewn about the back.

Radtoads use their long tongue to hit targets at a distance, choosing to attack with jagged teeth up close. Most radtoads can also release a cluster of eggs that act as mines. If a target tramples the cluster, the pile will burst, inflicting damage.[1]

A parasitic version of the radtoad marked with a darker green hide, thick tan vines, and blood red eyes. Its attacks may inflict illnesses on the player character if they are hit by attacks or step on egg clusters.

An albino version of the radtoad marked with a fleshy light-pink hide and light red eyes.

A glowing green version of the radtoad, luminescent due to excessive radiation absorption.

A charred, fleshy radtoad with dark red eyes infected with the Scorched Plague. All regular radtoad variants have a corresponding Scorched variant with the same stats, abilities, and items. They may become Scorched when attacked by scorchbeasts or the scorchbeast queen, becoming allies with other Scorched creatures.

A prime variant, encountered during the Primal Cuts seasonal event.

Radtoads are a potential candidate for taming. If found alone in a random encounter, the player character can send the tamed beast to their C.A.M.P. for defense.

Radtoads appear only in Fallout 76. 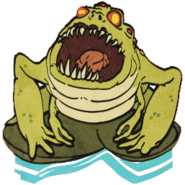 A radtoad, as shown on the unimplemented Botany Buddy perk card