Radstags are creatures found in Appalachia.

Radstags are descended from deer that survived the Great War, resulting in mutations such as bicephaly and the presence of a third pair of atrophied legs. These two smaller legs hang from the upper part of the chest. When they feel safe, they can be seen drinking from water sources, pasture grass or bushes or resting while lying on the ground.

Most radstags will flee on instinct when the player character or a predator approaches too close or attacks. However, some variants escape this rule and can attack their opponents with hooves or headbutts.

A juvenile variant of radstag. They are easily identifiable by their small size and their brownish coat peppered with small white spots. They will flee instinctively from the player character. Very often, they are accompanied by several adult radstags.

The female variant of radstag. Unlike males, they will instinctively flee from the player character, although there are rare cases where they can attack their opponents. They are often accompanied by other radstags.

The male variant, recognizable by their large antlers. They are often seen in small groups with other males or females.

An albino variant of radstag. They are much more aggressive than the normal variant and will attack the player character once detected.

A crazed variant of the radstag that will not hesitate to defend itself.

A radstag that appears to be suffering from rabies.

The female variant of the devolved radstag. Like the erratic radstag, this variant does not hesitate to defend itself.

A luminescent variant, due to high radiation absorption. They are automatically aggressive and will deal radiation damage when attacking.

A crazed and vicious variant of radstag. Like the erratic radstag, they are highly aggressive.

A weakened radstag variant encountered during Project Paradise. They are always hostile and provide venison for Trough A.

A friendly radstag, found during the Follow the Trail random encounter. 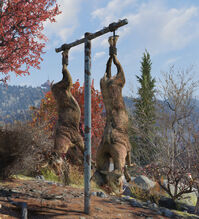 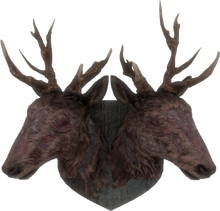 Mounted radstag head
Add a photo to this gallery
Retrieved from "https://fallout.fandom.com/wiki/Radstag_(Fallout_76)?oldid=3372513"
Community content is available under CC-BY-SA unless otherwise noted.