Fallout 4
Far Harbor
“The hideously mutated, two-headed Radstag is a pathetic creature that will likely run at the first sign of contact. But if forced to fight, it can prove a deadly opponent.”— Fallout 4 loading screen hint

Radstags are the mutated descendants of the Commonwealth and the Island's local deer population in 2287.

Radstags descended from the common deer in the Commonwealth after their ancestors were exposed to great quantities of radiation in the fallout of the Great War. Due to this longstanding exposure to radiation, radstags, like brahmin, have two heads, less fur and are sometimes covered in cysts.

Radstag are a genus descended from deer in the Commonwealth. They are dicephalic, or two-headed; each head is able to swivel and turn on its own. A closer inspection of the heads shows that each head's inner eye is blind. Radstag also have two underdeveloped legs hanging limply from their chest, qualifying them as hexapedal. Aside from the ability to bend when a radstag lays down, these legs are nonfunctional.

Radstag are usually brown-furred and patchy in places, with small pus-filled cysts from radiation, which most often cover the flanks, feet, heads, and snouts. The cysts more frequently appear on the rabid and glowing varieties and can cover most of the body. Radstag yearling coats are more colorful than those of adult radstag and feature white spotting, similar to the fawns of their deer ancestors.

Radstag usually travel in herds of up to four, typically consisting of one radstag and a combination of doe and yearlings. Although radstag are generally non-hostile and will ignore or flee from the player character, companions may attack them if they stray too close.

Adult male radstag of each variant can be legendary. Legendaries are much more aggressive than regular variants. One notable difference is a goring attack that will knock the Sole Survivor to the ground and possibly kill them. Radstags also possess an insta-kill attack where they impale the player character with their antlers.

This is the youngest and smallest of the radstags. They do very little damage and are unable to withstand much damage in turn.

Older and slightly more resilient than yearlings, they are a little more mature and do slightly more damage. However, they can be killed almost as easy as yearlings due to their low health pool.

This is the standard type of radstag one will encounter when traversing the Commonwealth. Generally shy creatures who will run if approached and won't attack unless provoked. They are easy to put down if need be.

Due to a genetic mutation these radstags are distinguishable by their white coloring and are often found as part of a herd. They are stronger than their standard counterparts and will occasionally inflict a poison effect on those they attack.

This type of radstag has been infected with rabies or some sort of illness impairing its natural reactions. As such they are more aggressive than their healthier counterparts and are more likely to attack as one encroaches on its personal space or without provocation.

This is the strongest type of radstag encountered in the Commonwealth. They have a higher health pool and have been exposed to so much radiation that their body literally glows with its excesses. When they engage in combat they inflict radiation damage on top of their standard attacks. They are normally seen in groups of three or four.

A variant of the radstag only found on the Island, devoid of any fur.

A variant of the radstag only found on the Island. They look more like water deer found mostly in pre-War Asia due to the presence of fangs.

A variant of the radstag only found on the Island.

A variant of the radstag only found on the Island. Unlike most of the other variants, devolved radstags are immediately hostile to anything but their own kind. Their visual appearance is similar to that of glowing radstags, but they are even stronger and more dangerous.

A variant of the radstag only found during the Creation Club quest The Quantum Stag, north of USAF Satellite Station Olivia. Unlike other radstags, this one can be spared by feeding it a bottle of Concentrated Quantum, after which it can be sent to a settlement. If spared the Quantum radstag counts as a settler, and killing it will count as murder.

Radstags appear in Fallout 4 and its add-on Far Harbor.

On rare occasions the glowing radstag may turn invisible during combat.[verified] 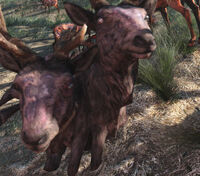 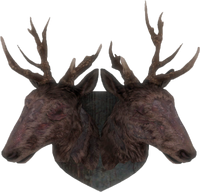 Some radladies in the Saugus River