Fallout 4
Nuka-World
“Radiation has mutated the common Emperor Scorpion into the deadly Radscorpion, one of the Wasteland's fiercest predators. Beware its claws and poisoned stinger.”— Fallout 4 loading screen hint

Radscorpions are arachnids mutated from the emperor scorpion, found in the Commonwealth and Nuka-World in 2287.

Radscorpions are large, mutated scorpions commonly found in and around abandoned structures. They originated from the North American Emperor scorpion,[1][2] which were prolific in many pet stores at the time of the Great War.[3] They have since mutated to become much larger, faster and more venomous than ever before.

Radscorpions sport highly venomous stingers, the ability to burrow underground in seconds, powerful claws and durable exoskeletons. Unlike Mojave or Capital Wasteland variants, the Commonwealth does not feature radscorpions that occupy a similar size category as giant radscorpions.

Radscorpions have either migrated to the Commonwealth from the southwestern United States or mutated independently from emperor scorpions kept as pets before the War in a similar manner to ones located in different areas of the continent.

Radscorpions are fast runners, extremely aggressive, extraordinarily well armored and will use their powerful claws and poisoned tails to attack enemies quickly and relentlessly; capable of dealing a large amount of physical and poison damage in only a few hits. With their ability to burrow underground and traverse large distances seemingly instantaneously, retreating from an encounter is often impossible. Their only weak spot is their relatively small face. Deathskull radscorpions are easily one of the most dangerous creatures one can encounter while exploring the Commonwealth, completely capable of killing the player character in even the highest grades of power armor.

Due to their claw and poisonous sting attacks as well as their great maneuverability, radscorpions are powerful melee fighters that should be dealt with preferably from a distance, or with specialized equipment if a direct confrontation is necessary. If attacked from afar, they will immediately burrow and emerge close to the player character, often in melee range, provided the ground type can be navigated through by them, so it is possible to avoid being caught unprepared by standing on rocks, or metallic/wooden surfaces before attacking. Weapons with armor-piercing mods as well as the legendary modifier "Penetrating" can help to improve the damage output against their armor reinforced exoskeletons.

Radscorpions are mostly found within the Glowing Sea. They can be found on occasions in other areas of the Commonwealth as well. Radscorpions can be pacified through the Wasteland Whisperer perk.

The standard variation of its kind, radscorpions can be difficult to fight at low levels since they have a quite high amount of Hit Points and powerful attacks compared to other creatures. These creatures are found all over the Glowing Sea, and one can be found at the Old Gullet sinkhole by triggering the cymbal-clapping monkey nearby.

Radscorpion hunters can be encountered as the Sole Survivor levels up. They are more dangerous than standard radscorpions, although with powerful weapons one may dispose of them quite easily.

Similar to the Fallout 3 rendition, albino radscorpions have a noticeable white color, which makes them easier to see due to their distinctive body color. These enemies may prove to be quite dangerous as they have a high amount of Hit Points and powerful melee attacks.

With a high enough level, the Sole Survivor may encounter radscorpion stalkers. These enemies are particularly resilient and their melee attacks may deal serious damage with inadequate protection.

A rare variation of the radscorpion, predators have nearly as much health as a behemoth and their powerful melee attacks may easily kill those unprepared.

Radscorpions appear in Fallout 4 and its add-on Nuka-World. 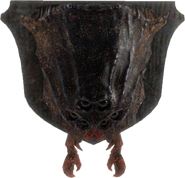