Radscorpions are mutated from the North American Emperor scorpion,[1][2] which were common in many pet stores at the time of the Great War.[3] Contrary to many expectations, their venom grew much more potent and deadly when they mutated rather than becoming diluted. Their poison is used in crafting the dart gun. Though considered nocturnal and sensitive to light, radscorpions can be found active during the daytime in the areas they inhabit. Apart from their size, they appear visually identical to regular scorpions, with thick, mottled, dark, blueish gray carapaces.

Radscorpions are not only powerful, but also have a nasty venomous sting that can kill victims if not treated quickly. Since they are indigenous to desert environments, they do not mind brightly-lit environments and will attack anyone in broad daylight as well as at night. Radscorpions can be seen burrowing into the ground from time to time, much like their pre-War cousins. These burrows are likely where they sleep and take refuge from the harsh conditions of the external environment like the intense heat and sandstorms.

Radscorpions will usually attack head-on and then attempt to flank the prey. Unlike other creatures, radscorpions lack a "weak point" that can be targeted for extra damage (such as a "head" for a headshot), which makes V.A.T.S. combat and firearms somewhat less effective against them. Radscorpions also take significantly reduced damage from any shots that hit their legs, such that even a critical hit from a high-powered weapon will only do minor damage. While close-by or indoor, the Radscorpions will make distinct "walking sound" that gives their presence away, but there are some cases that a radscorpion stays idle until it notices the target.

Radscorpions can often send poorly prepared travelers running for the hills, since they can be difficult to get rid of without getting serious injuries or casualties.

All radscorpions are affected by the Entomologist perk.

The most common variety of radscorpion. These venomous predators seem to possess different speeds, some taking their time and others bolting at top speed. Their size ranges from that of a large dog to small livestock.

A much larger radscorpion with a much more potent venom. These terrifying creatures can reach incredible sizes, ranging from livestock to a Corvega. The giant radscorpion is commonly encountered usually in the west and far south of the Capital Wasteland. It is not uncommon to see one turn from the target and back off, only to be joined by another and charge in again. In fact, they seem to operate in pairs most often, only preferring to attack alone when their partner is dead.

Albino radscorpions are about the same size as a giant radscorpion, but instead of having a dark bluish-gray appearance, they are pale white with pink joints and eyes. They deal out a very large amount of damage while taking very little themselves, while their stingers contain an extremely potent venom. They are exceptionally tough, and have significantly more hit points than almost any other creature or non-player character in the game, surpassed only by a super mutant behemoth and General Jingwei. A unique trait about these radscorpions is the fact that they slowly regenerate health when exposed to direct sunlight, similar to the effect of the Solar Powered perk to the Lone Wanderer.

If you use the dart gun against two giant radscorpions (shooting a dart at one first and a second dart at the other one), the weakest one will disappear from sight while the other is still engaging. [verified] 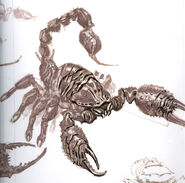 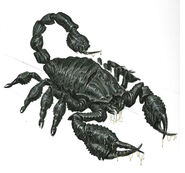 Retrieved from "https://fallout.fandom.com/wiki/Radscorpion_(Fallout_3)?oldid=2411793"
Community content is available under CC-BY-SA unless otherwise noted.