Large versions of the North American Emperor scorpion that are found after the Great War.[1][2] Antidotes have been derived from their venom.

Radscorpions will usually attack head-on and then attempt to flank their prey. Unlike other creatures, radscorpions lack a "weak point" that can be targeted for extra damage (such as a "head" for a headshot), which makes V.A.T.S. combat and firearms somewhat less effective against them. Radscorpions also take significantly reduced damage from any shots that hit their legs, meaning that even a Critical Hit from a high-powered weapon will only do minor damage. While close-by or indoor, radscorpions will make a distinct "walking sound" that gives their presence away, though it may happen that a radscorpion stays idle until it notices the target. All radscorpions are affected by the Entomologist perk.

The most common variety of radscorpion. These venomous predators seem to possess varying speeds, some taking their time and others bolting at top speed.

A much larger radscorpion with a much more potent venom.

Albino radscorpions are about the same size as a giant radscorpion, but instead of having a dark bluish-gray appearance, they are pale white with pink joints and eyes. They slowly regenerate health when exposed to direct sunlight, similar to the effect of the Solar Powered perk. 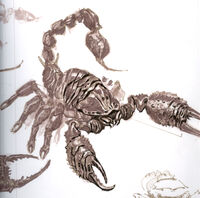 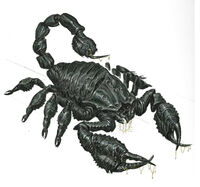