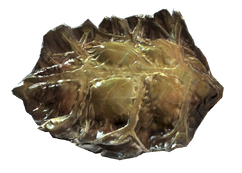 Radroach meat is a consumable item in Fallout 4.

The edible meat from mutated and irradiated cockroaches known throughout post-War America as radroaches. It is radioactive and offers very little in terms of health restoration and hunger satisfaction but may be cooked to provide a slightly more nourishing meal.

Retrieved from "https://fallout.fandom.com/wiki/Radroach_meat_(Fallout_4)?oldid=3450336"
Community content is available under CC-BY-SA unless otherwise noted.