Radroaches are creatures found in the Capital Wasteland in 2277.

If encountered, they will first try to scare off their enemies by flapping their wings and antennae while bobbing up and down and will attack. Radroaches are one of the weakest creatures in the game, about on par with bloatflies.

Radroaches are low-level enemies, hostile to the Lone Wanderer and any companions they may have. They are also usually encountered in groups of up to seven and "pounce" at their enemies and bite/pinch them with their small pincers while making a screeching sound.

Radroaches all share the same vital statistics, but can differ in aggressiveness and confidence.

Radroaches are the first hostile creatures the player encounters in the game and the only hostiles that have to be killed while still in Vault 101. They can be found nearly anywhere throughout the wasteland, with the most notable locations being the Nuka-Cola plant offices and the Gillian house in Minefield. The RobCo facility has the highest number of radroaches, with 31 in total. 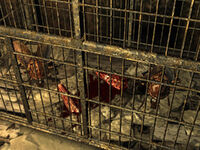 Fluffy and Jitters caged in the sniper shack 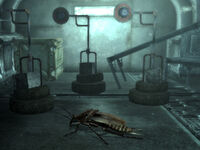 Take a pot shot at your first "enemy," a radroach