Radroaches are mutated insects found in the Mojave Wasteland in 2281.

These mutated Great American cockroaches, colloquially called "radroaches," or simply "giant cockroaches," are enlarged versions of the pre-War species that have exponentially increased in size, due to atomic fallout.[1]

Not nearly as common in the Mojave Desert as in the Capital Wasteland, radroaches typically infest abandoned homes and buildings (such as the Basincreek Building) to scavenge on food that was left behind by whoever previously lived there. Some can also be found in the toxic dumps and on/around the roads in between Goodsprings and Primm, as well as being able to survive in the hostile and toxic environment of the Sierra Madre and the Cloud.

Radroaches are not normally aggressive should one keep their distance; they are still, however, very territorial, and will attack if they feel sufficiently threatened, either by having a weapon drawn, by invading their habitat, by attacking an enemy in the immediate vicinity (which is limited to less than a foot around the creature), or by attacking them directly. Generally, they will flutter their wings and make distinct clicking sounds as a warning before attacking.

A normal radroach, with all the qualities mentioned above.

Irradiated radroaches are identical to the standard radroach, with the exception of a radioactive aura, similar to that of a feral ghoul reaver, including the ability to heal themselves with a radiation blast similar to a glowing one. Upon death, this strain of radroach will drop irradiated radroach meat, which gives extra radiation should the meat be consumed. 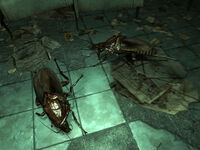