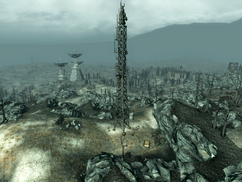 The radio tower is a location in the Capital Wasteland in 2277. It was added in the Fallout 3 add-on The Pitt. It is the source of Wernher's distress signal.

The radio tower is at the top of a rather steep hill. There is a bedroll nearby that can be slept on.

About one square east from the tower is a D.C. Journal of Internal Medicine and some other notable loot. It's near a large pool of water with radioactive barrels and a shipping crate in it. The loot is located on a table in the far northwest corner of the pool and can be accessed by swimming through the shipping crate or dropping onto the crate from the cliffs to the north.

The radio tower appears only in the Fallout 3 add-on The Pitt.

Retrieved from "https://fallout.fandom.com/wiki/Radio_tower?oldid=3352301"
Community content is available under CC-BY-SA unless otherwise noted.