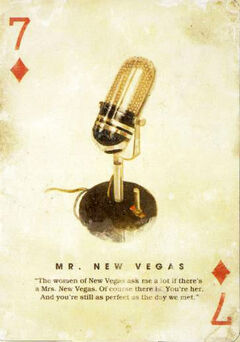 Radio New Vegas is the main radio station of New Vegas and the Mojave Wasteland.

The station is presented by an AI disc jockey, Mr. New Vegas, and plays both music and news. As one completes quests, the Courier's exploits will be referenced on the news bulletins as well as other various topics. This radio station plays mostly Las Vegas influenced music from the 1940s, '50s, and '60s. This is in contrast with the Mojave Music Radio that plays more traditional country music and a bit of western-rockabilly.

The track "Stars of the Midnight Range" was intended to be included on this station, but an error linked the entry in the radio tracklist to the MP3 file for "Big Iron," which causes "Big Iron" to be played twice as often as other tracks, and occasionally play twice in a row.