1d
“A neighboring Vault has had a massive radiation leak and the citizens have turned into Feral Ghouls!”

Radiation Leak! is a single-stage overseer quest in Fallout Shelter.

A local vault has suffered a catastrophic radiation leak and potentially ghoulified the majority of its residents. The player's dwellers can be sent out to perform a search and rescue mission, provided they have radiation suits. 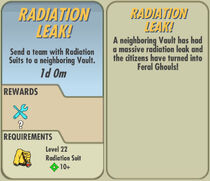