Radiation King is a location in Georgetown in the Capital Wasteland in 2277.

Residing in Georgetown located next to A Cuppa Joe and Cornucopia Fresh Groceries, there may be super mutants, Talon Company mercs or Regulators (depending on the player character's Karma level) in the nearby area. Upon entering, all that can be seen of the store is a single main room, with a bathroom. It is inhabited by a scavenger with a ham radio, jukebox and three radios.

The scavenger trades items and can repair broken gear, although his Repair skill is only 12. He can be killed with a negative effect on Karma and his wares looted, however, stealing the food is considered theft and will also result in Karma loss. Everything else is not owned and can be taken freely.

The Radiation King location appears only in Fallout 3. 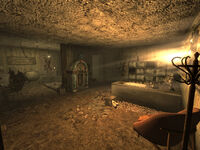 Add a photo to this gallery
Retrieved from "https://fallout.fandom.com/wiki/Radiation_King_(location)?oldid=3498754"
Community content is available under CC-BY-SA unless otherwise noted.