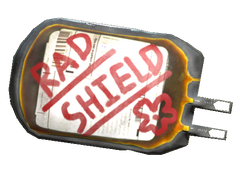 RadShield is a consumable item in Fallout 76.

RadShield is a radiation shield developed by Ella Ames[1] that is more powerful and lasts longer than Rad-X. Unlike Rad-X, it does not suppress mutation effects and there is no diluted version of RadShield.

RadShield does not stack with Rad-X or diluted Rad-X. Taking any of the three drugs while any other of them is active will simply replace the effect. Unlike Rad-X or diluted Rad-X though, RadShield stacks with itself, and taking multiple doses increases Radiation Resistance by 300 per dose. Due to the diminishing returns inherent in how resistances work in Fallout 76, this is of limited usefulness though. Lowering radiation damage in a nuke zone to much less than the 10 per second that can be achieved at 1200 Radiation Resistance is impractical unless specialized protective gear like hazmat suits or power armor is used.

The recipe for RadShield and four units of it are obtained by completing the quest An Organic Solution.

Retrieved from "https://fallout.fandom.com/wiki/RadShield?oldid=3495309"
Community content is available under CC-BY-SA unless otherwise noted.