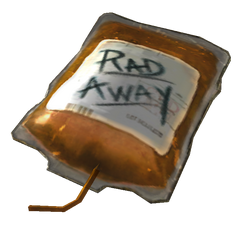 RadAway is a consumable item in Fallout 3.

This section is transcluded from RadAway. To change it, please edit the transcluded page.

RadAway is an intravenous[1][2] chemical solution that bonds with radioactive particles and removes them from the user's system.[3] While Rad-X is designed to increase the body's natural resistance to radiation, RadAway is designed to be used after exposure. Purging the body of radiation takes some time to complete, and anyone using it will experience its adverse effects: it's a potent diuretic and can cause nausea, diarrhea, stomach pains and headaches.[4][5][6]

In Fallout 3, RadAway is no longer addictive. This item looks like a blood pack with "RadAway" written on the label, although it also has a short tube sticking out of the bottom and a distinctive orange color compared to a typical blood pack's dark red. It can be found in almost every medical or science facility and can often be found in first aid boxes that hang on walls or are kept on shelves. It can also be bought from a variety of doctors in the Capital Wasteland. The effectiveness of RadAway is dependent on the player character's Medicine skill, meaning that the higher the player character's Medicine skill, the more Rads are removed.

Retrieved from "https://fallout.fandom.com/wiki/RadAway_(Fallout_3)?oldid=3494813"
Community content is available under CC-BY-SA unless otherwise noted.