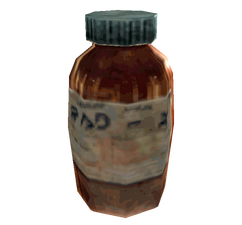 Rad-X is a chem in Fallout 3 and Fallout: New Vegas.

Rad-X is an anti-radiation chemical that can significantly reduce the danger of irradiated areas. When combined with an advanced radiation suit, Rad-X can create near-immunity to radiation, even at moderate medical skill levels.

Rad-X is reasonably common and can be used frequently. Like stimpaks and RadAway, Rad-X is non-addictive, and its effectiveness is controlled by the Medicine skill. Taking multiple doses of Rad-X does not increase the total radiation resistance (the effects do not stack). Instead, the drug's active time is lengthened (the effective time stacks).

No combination of Rad-X and radiation-resistant clothing will grant total immunity to radiation, as Radiation Resistance caps off at 85%. Any irradiated area will, at the very least, have a persistent +1 rads effect even at the highest levels of radiation resistance, meaning the player will never be able to survive longer than 16 minutes and 40 seconds without the use of a radiation removal item (or 17 minutes 32 seconds with the Rad Absorption perk).

Retrieved from "https://fallout.fandom.com/wiki/Rad-X_(Fallout_3)?oldid=3233653"
Community content is available under CC-BY-SA unless otherwise noted.