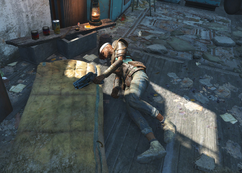 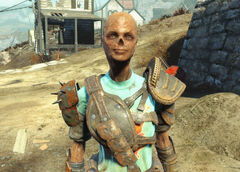 Rachel Watkins is a deceased scientist in Nuka-World in 2287.

An organic chemistry graduate with a penchant for acting, Rachel found herself in Nuka-World as an actress, playing the part of Princess Cherry in the King Cola show at Kiddie Kingdom. Her ultimate goal was to find a job with the elite Beverageers team working for John Caleb-Bradberton, but Rachel wanted to get to know the environment before applying. It became a stunning success, as she found a group of like-minded people to forge close bonds with. Among them was Oswald Oppenheimer, a stage magician. The two became fast friends and then lovers. Nobody thought that when they toasted to a hell of a year on New Year's 2077, they would be taken quite literally. She, along with a few others, would band together to fortify their employee tunnels into a shelter, and was one of the many employees who were able to take shelter there.[1][2]

When the Great War came, the Kiddie Kingdom crew stuck together, weathering the chaos well. They shored up the amusement park's walls, creating defenses to protect themselves against the chaotic situation unfolding outside.[2] With Oswald as their leader, everything seemed on track for a quantum of normalcy. However, that was when the first radiation storm hit the valley. Bathing everything in radioactive fallout picked up east of the mountains, Oswald's and Rachel's group was overwhelmed and exposed to severe radiation. As the unofficial doctor of the group, Rachel tried her best to help. Mostly it was consoling people as they died in her arms. An organic chemist is not a surgeon.[3][4]

She was one of the survivors, turned into a ghoul by the radiation. They stayed inside Kiddie Kingdom, building a world for themselves within these walls. With time, some of their friends began to deteriorate, becoming feral. When Rachel's best friend, Fran, became Afflicted (as they termed this state), Rachel lost it. Fran was immured inside a house in the Kiddie Kingdom, as Rachel cried her eyes out. But there was no time for self-pity. The ghoul domain came under attack from raiders, who managed to push the group back to the castle.[5][6][7] That's when the Afflicted started clawing their way out of the boarded-up houses and counterattacked, while Oswald discovered his glowing one powers and the ability to heal other ghouls. The attackers were pushed back in short order.[8][9][10][11][12]

However, even with Oswald's abilities, the Affliction continued to spread. By 2286, only a handful of sane ghoul survivors were left and Rachel exhausted every avenue of research. In desperation, she decided to head outside the protection of Kiddie Kingdom to seek a cure. Her first stop was Bradberton. From there, she headed deeper into the wastes. Her search was for naught, as she found out time and time again from countless towns she visited that no cure existed and ghouls simply go feral eventually. Distraught, she returned to the valley, only to find out that she herself was deteriorating. Unwilling to become a danger, she holed up in one of the buildings in Bradberton. After recording a final message to Oswald, she took her own life, ending it on her own terms.[13][14][15][16][17][18]

A Magical Kingdom: Retrieving Rachel's holotape prior to confronting Oswald will give a speech option to make him back down, taking his "afflicted" and leaving Kiddie Kingdom.

Rachel appears only in the Fallout 4 add-on Nuka-World.

Orientation of Rachel's location
Add a photo to this gallery

Retrieved from "https://fallout.fandom.com/wiki/Rachel_Watkins?oldid=3400848"
Community content is available under CC-BY-SA unless otherwise noted.